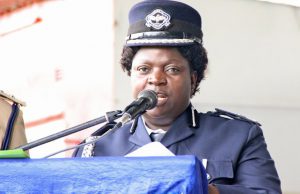 Police has dismissed an allegation by UPND leader Hakainde Hichilema’s wife, Mutinta that police officers who visited their house to arrest Mr. Hichilema had stolen money and other property.

In a statement to Breeze News, Police Spokesperson Esther Katonga says that the allegation lacks merit.

She says that on Friday, Mrs. Hichilema went to Woodlands Police in the company of the media with a view to lodge a complaint against some police officers alleging that they stole undisclosed amounts of money and property during the time when the officers went to apprehend Mr. Hichilema.

Ms. Katongo says that police officers told Mrs. Hichilema to wait as they were attending to another member of the public but she opted to leave and did not go back.

She notes that Mrs Hichilema has decided to report the alleged theft, 18 days from the day it is purported to have occurred which is clearly an afterthought intended to damage the image and reputation of the Zambia Police.

Ms Katongo says that when this allegation started trending in some quarters of the media, Police had made their own inquiries and it was established that the allegation lacked substance and was false on inquiry.

She says that the police will therefore, not entertain the complaint as it has already investigated it and found to be false and malicious.