Former President calls for a holistic approach to improve agriculture 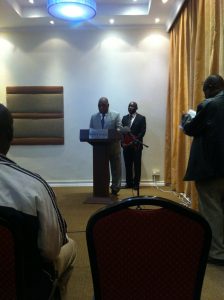 Speaking when giving the first public lecture for the Eastern University in Chipata last evening, Mr. Banda stated that Zambians needed to change their mind-set by first addressing their faculties.

The former head of state, stated that the emphasis on agriculture programmes, taken by the Eastern University was just an application of a branch of science.

He challenged the university to take a holistic view by looking at a bigger picture and focus on science, technology, engineering and mathematics.

Mr. Banda advised the university to start with these areas so that people can later branch in other scientific and management faculty like medicine, agriculture sciences, forestry and, tourism.

He also challenged the university to find a way in which it can participate in the science and mathematics teacher fast tracking training programme by the Ministry of Education for would be students.

The former president also referred to a recent news item on Breeze FM, which revealed that Eastern Province needed 4,000 teachers to address its staffing challenges and that the most critical areas are science, mathematics, ICT, Business studies and Zambian languages.

He says that this information and the good performance of pupils from Eastern Province in physics and chemistry in the 2016 grade 12 examinations, proves that there is reasonably a strong base from which the Eastern University could draw it’s would be students for such programmes.

Speaking to journalists after presenting his lecture for the Eastern University, Mr. Banda stated that without peace, Zambians cannot achieve anything.

He explained that every leader must call for peace to enable every Zambian achieve what they want to do.

And the Ministry of Education in Eastern Province has welcomed the setting up of the Eastern University in Chipata.

Provincial Education Officer, Allan Lingambe says that the approach taken by the university to have a bias towards agriculture is in line with the presidential directive to diversify the economy.

Speaking to journalists, Dr. Lingambe further stated that the aspirations of the university were agreeing with the nations’ aspirations.

He revealed that the Ministry of Education in Eastern Province is opening five schools, which will be centres of excellence in agriculture.

Dr. Lingambe stated that the ministry is currently in the process of identifying the five schools.

He pointed out that to make these schools effective, the ministry will need qualified teachers to man the departments.