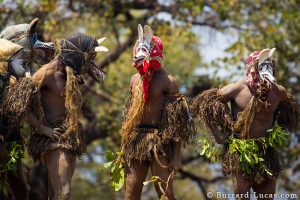 Chief Chanje of the Chewa people in Chipata district has warned Nyau dancers in Chief Chikuwe’s area against harassing people.

ZANIS reports that Chief Chanje said that he has received reports that Nyau dancers in the area are harassing people found at communal places such as boreholes, health centres and schools.

He was speaking at the handover ceremony of seven hundred beehives to farmers by Action for Positive Change, APC in Chiparamba area of Chief Chikuwe.

The tradition leader says regulations are clear that there should be no Nyau performances during school days, unless during special occasions and when one of the members dies.

He advised people in the area to report, whenever Nyau dancing takes place during times when it’s banned.

Meanwhile, Chief Chanje has advised parents to desist from marrying off children at young age.

He said any parent who marries off children at a young age will be punished.